Welcome to the Scares!

My short story "Horror on Interstate 89" will be posted here on my blog this Halloween. I'm excited to release this story, and...

5 Classic Short Horror Stories You Can Read Online For Free

Are you in the mood for some creepy old tales? Delve into these classic short stories by some of the greatest masters of horror and suspense. All 5 of these famous tales are available to read online for free... 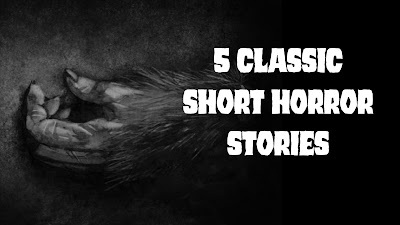 Three wishes are granted to the owner of the Monkey's Paw, but the wishes come with an enormous price for interfering with fate. The story was first published in 1902 in the collection The Lady of the Barge.

2. The Empty House by Algernon Blackwood

A man accompanies his adventurous aunt to a notorious house where, a century ago, a servant was murdered by her jealous suitor. The story was first published in 1906 in the collection The Empty House and Other Ghost Stories.

3. The Scythe by Ray Bradbury

A man and his starving family discover a dead wheat farmer who is grasping a single blade of wheat and leaves his farm to who ever discovers him. The story was first published in the July 1943 issue of Weird Tales.

4. The Lottery by Shirley Jackson

A small American town prepares for its annual tradition—a lottery in which every family must participate, and no one wants to win. The story was first published in the June 26, 1948 issue of The New Yorker.

5. The Outsider by H. P. Lovecraft

A mysterious individual who has been living alone in a castle for as long as he can remember decides to break free in search of human contact and light. The story was first published in the April 1926 issue of Weird Tales.

By Owen Mulligan
Email ThisBlogThis!Share to TwitterShare to FacebookShare to Pinterest

Owen Mulligan
Owen Mulligan writes scary stories for horror fans. He grew up reading Ray Bradbury and Stephen King and watching scary movies at the drive-in. He lives in Vermont where you might find him roaming the woods or exploring mysterious locations.